Yields on 10-year paper dropped to 1.55 per cent, taking them under two-year paper. Such an inversion was last seen in 2007 and correctly foretold the great recession that followed a year later.

Asian stocks slid and oil prices extended a punishing sell-off on Thursday as investors feared an historic drop in long-term US bond yields could prove a herald of recession globally.

Spooked investors stampeded to the safety of sovereign debt and drove yields on 30-year Treasuries to all-time lows at 1.97 per cent. Yields have now fallen a staggering 60 basis points in just 12 sessions to pay less than three-month debt.

Yields on 10-year paper dropped to 1.55 per cent, taking them under two-year paper. Such an inversion was last seen in 2007 and correctly foretold the great recession that followed a year later.

“The yield curves are all ‘crying timber’ that a recession is almost a reality and investors are tripping over themselves to get out of the way as economic recession hurts corporate earnings and stocks can drop as much as 20 per cent,” said Chris Rupkey, chief financial economist at Mufg Union Bank.

The only saving grace was that the sheer scale of the scare would be bound to alarm central banks everywhere and likely draw a policy response, especially from the Federal Reserve.

The futures market was clearly expecting drastic action as it priced in a greater chance the Fed would have to cut rates by half a point at its September meeting.

“Hoping for the best on the policy front but positioning for the worst on the economic backdrop seems to be the flavour of the day,” said Stephen Innes, a managing partner at Valour Markets.

“The Fed, now out of necessity alone, will need to adjust policy much more profoundly than they expected.”

That hope helped E-Mini futures for the S&P 500 and the Euro Stoxx 50 nudge 0.2 per cent higher in Asia. 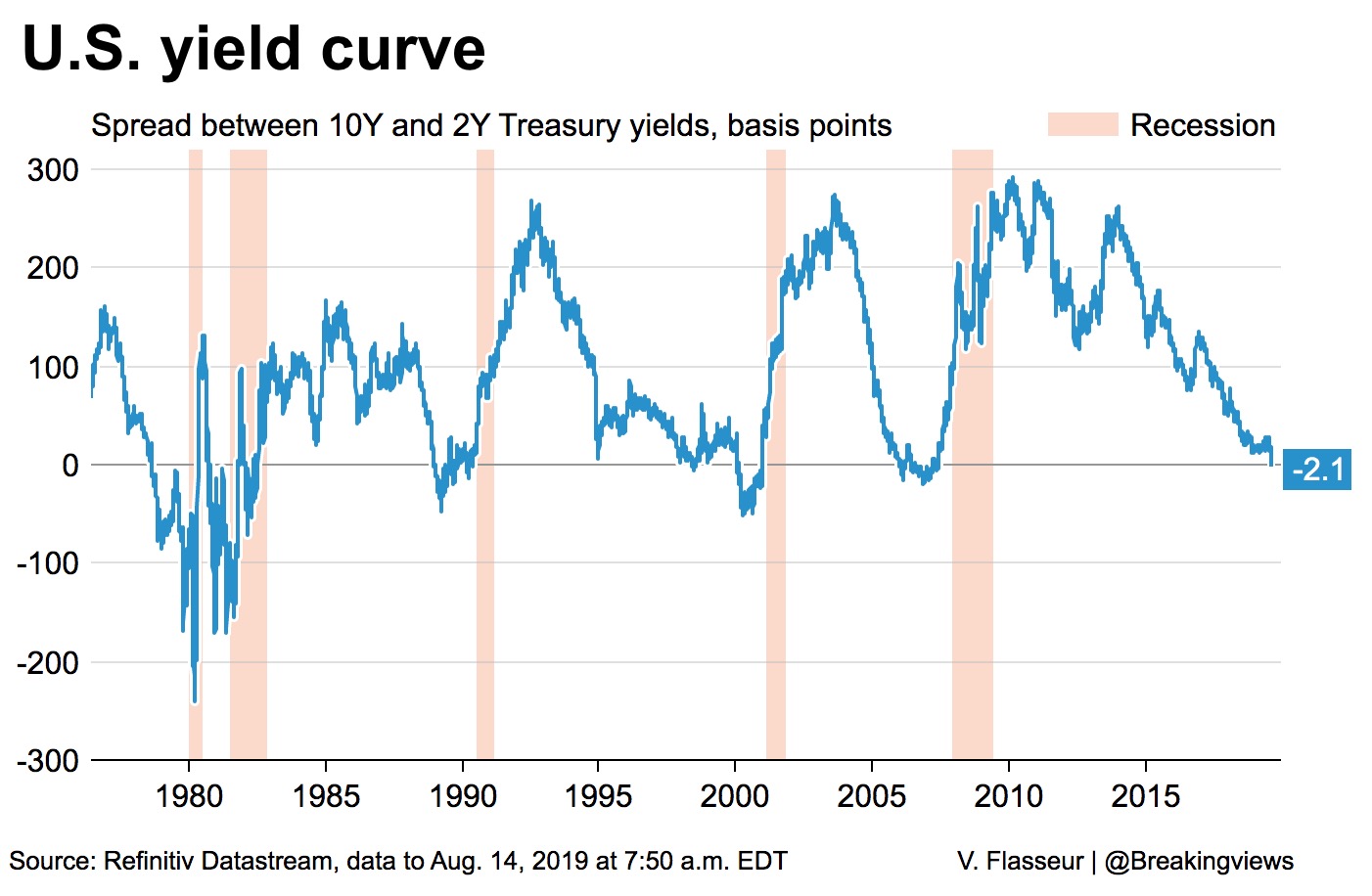 Japan's Nikkei was still off 1.5 per cent but up from early lows, while Shanghai blue chips eased a relatively modest 0.5 per cent.

All three of the major US stock indexes tumbled about 3 per cent overnight, with the blue-chip Dow posting its biggest one-day point drop since October.

Global growth woes have mounted as the Sino-US trade war claimed ever more victims, with the German economy contracting in the June quarter and a truly dire set of activity data for July out of China.

President Donald Trump on Wednesday seemed to tie a US trade deal with China to a humane resolution of the weeks of protests wracking Hong Kong.

A top Australian central banker on Thursday warned a world downturn could become “self-fulfilling” if the uncertainty over trade led businesses to put off investment indefinitely.

The threat to global demand took a heavy toll on oil prices, with Brent crude losing another 44 cents to $59.04 a barrel, after shedding 3 per cent overnight. US crude was last down 33 cents at $54.90.

Major currencies were relatively calm, with the yen gaining just a little from its status as a safe harbour. The dollar was last at 105.85 yen having fallen 0.8 per cent overnight form a top of 106.77.

The dollar index was a shade easier at 97.932, with the euro bearing its own burdens at $0.1.1147 following Wednesday's soft German data.

What scientists know after 100 days of coronavirus

Business Extra: What does the future hold for NMC Health?

NMC Health, Finablr and UAE Exchange – who is owed what?

How the coronavirus has affected the travel industry

How countries are defending their economies amid the pandemic

NMC Health, Finablr and UAE Exchange – who is owed what?

How the coronavirus has affected the travel industry

How countries are defending their economies amid the pandemic