His role within the organization is shrouded in mystery

The eldest son of Hezbollah leader Hasan Nasrallah, who was designated on Tuesday as a global terrorist by the US state department, is an elusive figure who plays an ambiguous role in one of the strongest Shiite militant formations in the region.

Mohammad Jawad Nasrallah has not featured prominently on Hezbollah media channels, nor has he been known to be among the group’s senior rank and file. But Nathan Sales, the special coordinator for counterterrorism at the state department told The National on Tuesday that he is a “rising leader” in the group.

Mr Hasan Nasrallah has never publicly spoken about his son, with the exception of a speech in 2017, in which he conceded that he is a member of one of Hezbollah’s units, without providing any additional details.

Hezbollah has not publicly commented on the latest designation but the group’s leader has previously dismissed sanctions imposed on Hezbollah members, saying that they will have little impact.

Meanwhile, supporters of Hezbollah took to social media on Tuesday to respond to the designation. The hashtags, #WeAreAllTerrorists and #WeAreAllJawad, made rounds on Twitter. 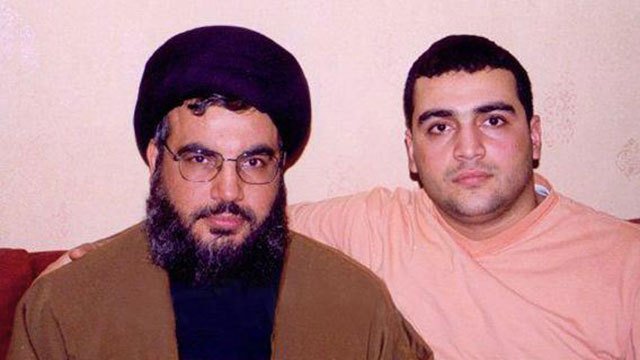 In Lebanon, Jawad Nasrallah is known best for writing poetry criticizing Israel. He is also well known for tirades on Twitter, in which he slammed media networks and journalists critical of Hezbollah. Regionally, he has stirred controversy by criticizing Saudi Arabia and other critics of the Shiite group or its Iranian backers. His Twitter account is currently suspended.

He appeared in at least one sit-down interview back in 2007 with Lebanon’s NBN network, which is backed by Shiite speaker of parliament Nabih Berri. But he did not disclose any information about his role in Hezbollah during the nearly one-hour-long interview.

The only time details of his position were disclosed before Tuesday’s state department statement was when the Israeli Shin Bet intelligence agency in 2016 claimed that he was involved in recruiting and supporting a cell of Palestinians, who were tasked with carrying out suicide attacks in Israel and spying on Israeli forces.

A statement released by the Shin Bet, at the time, accused Jawad Nasrallah of using a “secret communication channel” to recruit and issue instructions to Mahmoud Jalloul, a Palestinian national who would lead the group in the occupied West Bank city of Tulkarm, near the border between Israel and the Palestinian territories.

The intelligence agency said it was "highly unusual" for Hezbollah to directly control a cell in the Palestinian territories.

Hezbollah did not publicly comment on the accusations. Meanwhile, the Israeli government said it arrested the five Palestinians believed to be part of the cell.

The state department on Tuesday also named the Al-Mujahidin Brigades (AMB), which it identified as a Palestinian organization with “ties to Hezbollah,” as a global terrorist group. It claimed that Hezbollah has provided funding and military training to AMB members.

It was not immediately clear whether AMB had ties to the Hezbollah-backed cell arrested in 2016 but Washington on Tuesday said that the latest series of designations is meant “to deny Mr [Jawad] Nasrallah and AMB the resources to plan and carry out terrorist attacks.”

In addition to the sanctions, the state department on Tuesday also announced financial rewards for information on two Hezbollah leaders and a senior member of Hamas.

The state department identified Harb as a close adviser to the Hezbollah leader, claiming he has served as the group’s chief military liaison to Iran and to Palestinian fighters. It also accused the Lebanese national of commanding and supervising military operations in the Palestinian territories and in several countries throughout the Middle East.

In May 2015, Saudi Arabia designated Harb as a terrorist and accused him of commanding Hezbollah’s “central military unit” and of being responsible for the group’s operations in Yemen.

Mr Tabataba’i, meanwhile, is believed to have commanded Hezbollah’s special forces in both Syria and Yemen.

The state department said both Hamas and Hezbollah receive weapons, training and funding from Iran. Washington recently reimposed sanctions against Tehran after President Donald Trump withdrew the United States from a 2015 nuclear deal.

Hezbollah -- founded during the civil war by supporters of Iran's revolutionary government with a goal of ending Israel's occupation of south Lebanon -- has increasingly become a force around the region.

It is believed to have sent thousands of fighters to Syria in a bid to prop up President Bashar al-Assad, an Iranian ally and member of the heterodox Alawite sect who has ruthlessly tried to crush mostly Sunni rebels and the extremist Islamic State movement.

Travelling to and from the UAE: All you need to know